Today is the last day of August - last day of summer 2015.
This August marked the 70 year anniversary for the end of WWII, the very first atomic bomb testing, and the first (and hopefully last!) time nuclear weapons were used against humans. 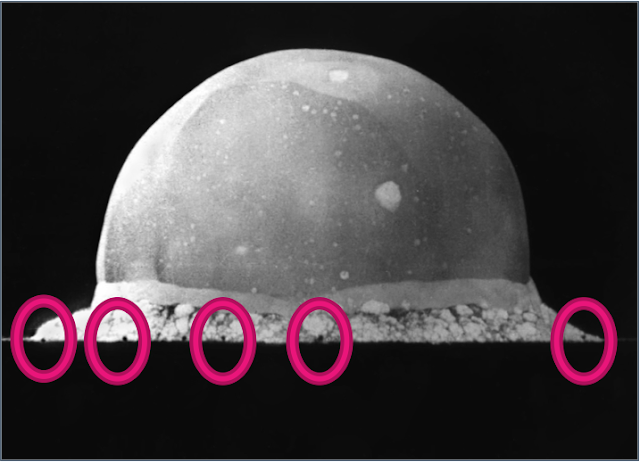 This picture is of Trinity - the first ever test of an atomic bomb/nuclear weapon. The picture is taken around 1 hundredth of a second after detonation of the bomb. The big grey thing is actually a fireball, which is around 200 meter in diameter. Inside the pink circles are trees. Trinity was tested on July 16 1945, and it was the same kind of bomb as the one in Nagsaki (on August 9 1945) - called Fat Man - except it was a little bit smaller.

Little Boy was a uranium bomb (made of highly enriched uranium), and Fat Man was a plutonium bomb (made of plutonium that they produced from natural uranium in a reactor). Together they destroyed the cities of Hiroshima and Nagasaki, and killed around 130 000-250 000 people...
When an atomic bomb explodes, the nuclear force is released, and that is why they are so powerful - and even though it is a horrible and really scary device, it is also extremely fascinating (the nuclear force, that mostly is responsible for keeping all nuclei everywhere together, IS fascinating). Often people believe that nuclear weapons are dangerous because of radioactivity, but it is mainly the extreme explosive force, and the heat that kills people - not radiation.

Last year I went to Japan to make the short film Sushi and Nuclear (Sushi og Kjernekraft). Going to Hiroshima and actually see the Atomic Bomb Dome made a very strong impression... You can see the English version of the film HERE, and the Norwegian version HERE.