I love thai food! Often we order take-out (and I always have some kind of curry), but our "new year's resolutions" are about spending more money on actually going out, and then less money on just stupid take-out (not that it's always stupid, but we end up ordering take-out that isn't particularly tasty, and even though it's fast, it isn't that fast, and even though it isn't that expensive it adds up to being money that would have been more fun to spend on going to a restaurant, or the movies, or whatever). The "problem" is that both Anders and I work a lot these days, and we are often dead tired when we're finally home - that's when it's too easy to just grab the phone and order something to our door :P

Yesterday was one of those days when I wanted to make something for us, but didn't really have the time, so I decided my new thing for 2016 is working your ass off-dinner :D Something that's super easy to make (so that we don't end up ordering take-out instead), and at least as tasty as the take-out we would have eaten instead - for people who are "working their ass off" ;) A real working your ass off-dinner (either you're working hard because you're trying to do a phd, or you're a student or whatever) has to be:

2) no planning needed - it has to be possible to make the moment you think I'm hungry, I want dinner

4) fast - it has to be ready almost the moment you think I'm hungry, I want dinner

The goal is that you can use stuff that's in your freezer, or canned, or dry - stuff you can buy long before you're actually going to use it. I have now filled my freezer with frozen vegetables: broccoli, green beans, spinach, and a "thai wok vegetable"-mix thingy. Also I buy a big bag of mushroom that I chop and put in plastic bags in my freezer, and I do the same thing with chicken. I also have canned stuff, like coconut milk and tomatoes - they last forever <3

Yesterday I made working your ass off-thai curry, and here's my recipe:


You can also add: lime/lemon, fish sauce (Nam Plah), some cream - these are ingredients I always have, and I added. Yesterday I happened to have some spring onions that needed to be eaten, and they are perfect for more or less everything so 4 of them went into the curry. 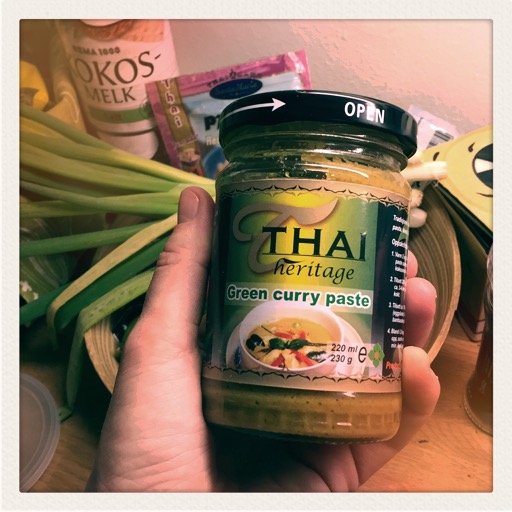 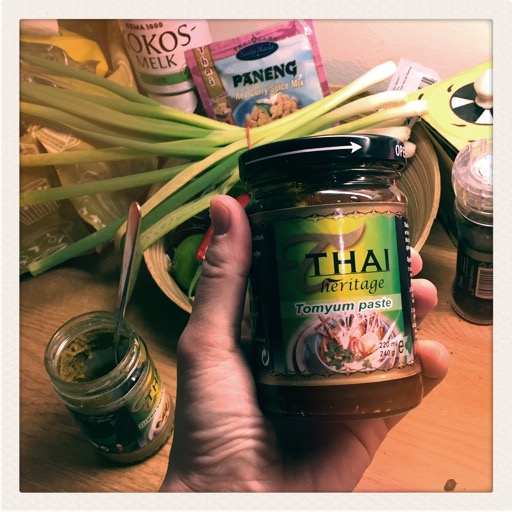 both pastes (curry and tomyum) lasts "forever" after they're opened - just shut the lid tightly, and put them in the fridge 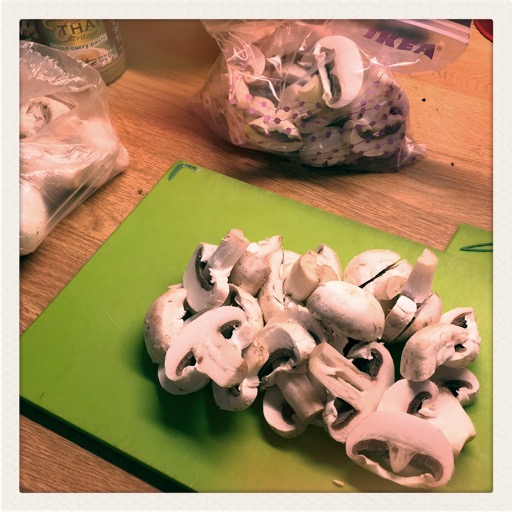 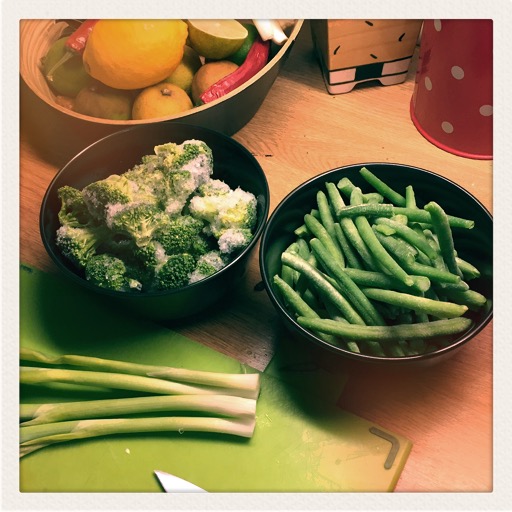 Put some flavorless oil, like rapeseed oil, in a pot. Heat it and put in a tablespoon of the curry paste. (You can use more if you want a hotter version, and less if you want a milder version.) 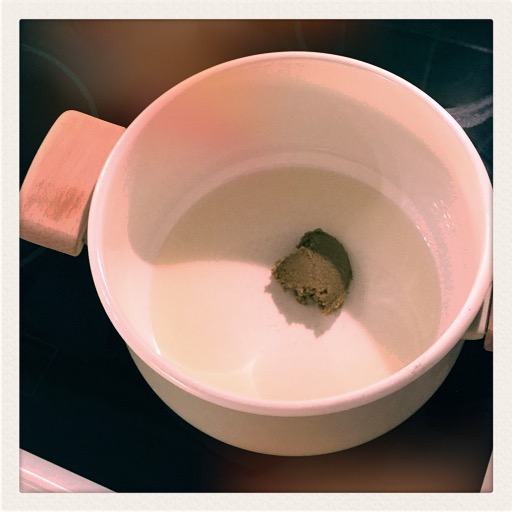 Stir, and put a tablespoon or two of the tomyum paste in the pot. Turn down the heat, and mix the two pastes together. 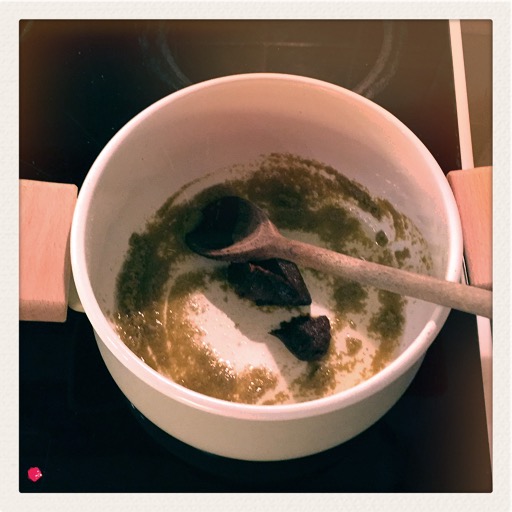 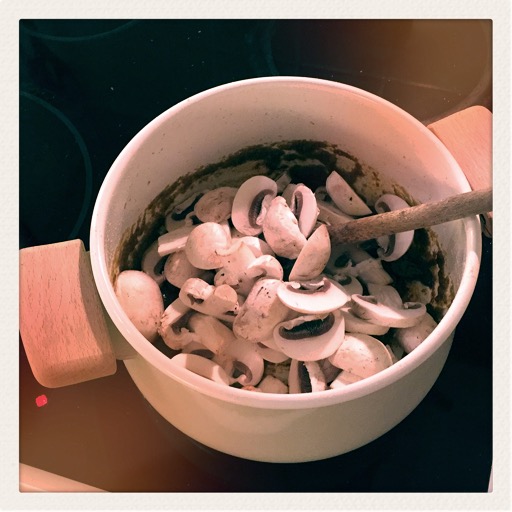 If you have, you can add some cream - I love cream, so for me it's (almost) no question about this one :) 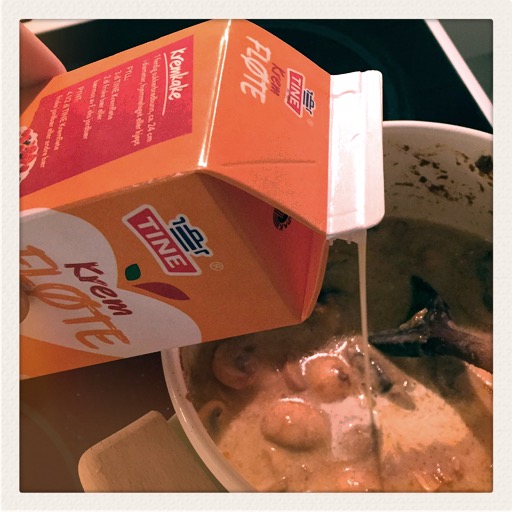 Add the meat (chicken or other type) and the vegetables. When the meat is cooked through, it's more or less ready. 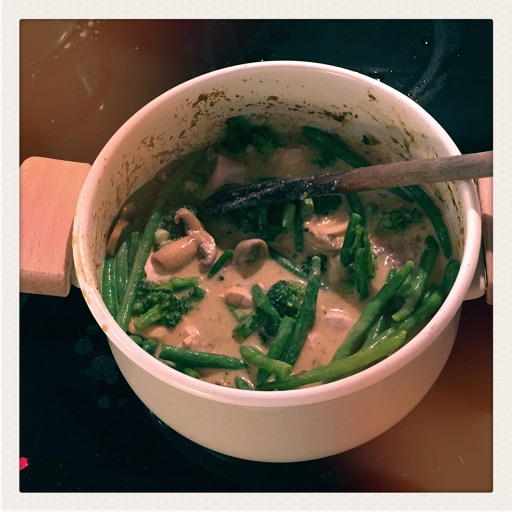 Taste it. Add pepper and a little bit of fish sauce (or salt), squeeze a lime/lemon if you have. Ready! 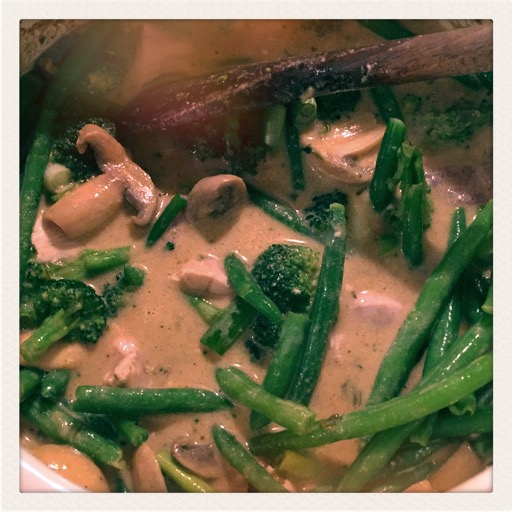 I like to eat it just as it is, but Anders prefer some rice at the side. You can choose whatever you like :)


This is of course not my "very best perfect fantastic gourmet"-recipe for thai food, but the very easiest way (I can think of) to do it. It's easy, it's quick, it's simple, and it's quite tasty - what you need when you're busy working your ass off <3


You can of course also change all the frozen ingredients into fresh ones, and suddenly you have an even tastier more "fancy" curry version. And if I had more time, I would have chopped a chilli and some garlic and added them at the beginning, before the mushroom.
The actual cooking part doesn't take any more time, but you have to cut the vegetables, the mushroom and the meat, and you have to buy everything fresh...:)

Bon appétit, and good luck with working your ass off <3