Good morning everyone <3
I'm at the University, attending the second day of the "5th Workshop on Nuclear Level Density and Gamma Strength" - the conference/workshop that our research group is arranging. Nuclear Level Densities and Gamma Strength (Functions) are fundamental properties of the atomic nucleus, and they are sort of the main goal of my data analysis just now.

I think my favourite talk so far was the one called "Neutron capture cross sections for the astrophysical r-process" by professor Artemis Spyrou from Michigan State University. Nuclear astro physical applications are really exciting <3 Unfortunately I missed the first talk this morning (stupid rain), which was by Luciano Moretto - I really regret this, because he always gives great talks...:/
Anyway; I'll be spending the rest of the week in this same auditorium, listening to talks - together with around 60 other nuclear physicist from around the world (West Coast of US, South Africa, and India, for example :) )

I just realized that a hashtag has occured; #oslogamma! I don't think it will be the most popular hashtag on twitter, but at least it's there, if you want to follow ;) 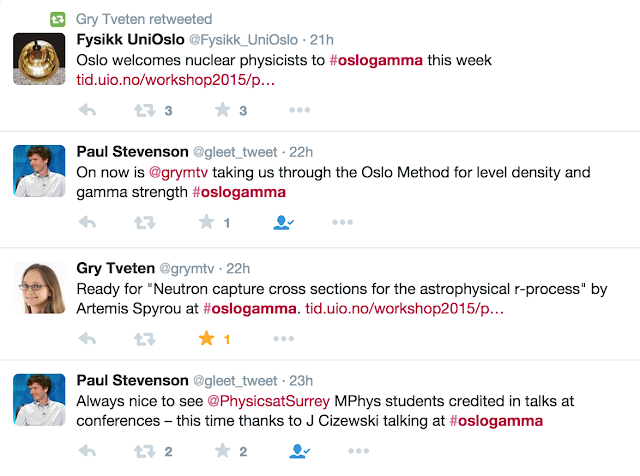 Ok, now I have to pay close attention to all the talks - or, if there's something I don't understand ANYTHING of, I need to prepare my own talk that I'm giving on Thursday. Also, I need to work more on the actual analyzis of my data, so that I have more than just one plot to show...that would be a very short talk ;)