Meaning another week with my plot... Obsessing about my plot. Trying to make it just perfect. Try different colours. Different styles. Obsess - science style.
On Friday I was actually thinking that this is it, that I was finished with this part of the data analysis; but then, today, I realised that other people have done similar things (analysed other uranium nuclei, for example), and that they have put five of those black pumps in the plot, instead of just four - so now I'm thinking about doing the same thing.

As you can see I've added more colours to it now; there's another, lighter pink colour, a yellow-orange'ish colour, and the uranium-235 is bright green - since someone suggested that as a colour :) Maybe you have suggestions for the black bumps? They don't have to be black...;) 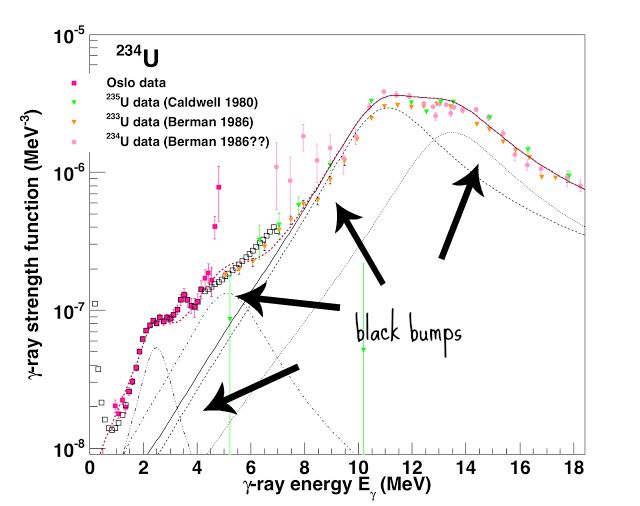 Right now I'm having a glass of wine with supervisor Jon - he's here for the week, and in addition to obsessing about this plot, I've shown him where I am in the entire analyse thing. We looked at a couple of other plots too today, and he said that there's definitely a cool paper in there...:D (Of course we don't know for sure yet, but I choose to be optimistic <3 ) If you follow me on Snapchat (I'm sunnivarose, of course), you've seen the plot that Jon was so excited about.